I have recently moved to Brent from Islington, where I stood as a candidate in the 2018 London Local Elections in Caledonian ward. I’ve been a Green Party member for just over 4 years and in that time have been committed and determined to embody green politics and values.

I stood as parliamentary candidate in Middlesbrough in 2015, where I attended University, achieving 4.3% of the vote. In the last year, I have held the role of Young Greens Co-Chair, co-leading the youth and student wing of the Green Party for around 8000 members across England and Wales. My roles included bi-national advocacy of Green Party policies across England and Wales, strategic political leadership of the organisation, running high-profile, large-scale accessible and inclusive campaigns and events, supporting liberation groups and facilitating training. In this role I also held a seat on the Green Party Executive and acted as a lead spokesperson for the Young Greens on press and media enquiries.

As a policy manager and youth worker at one of the UK’s largest youth charities – UK Youth, I firmly believe that early intervention of skills-based programmes and a full, standardised youth service are the key to ensuring young people are occupied, away from harm, aware of the wider world and their impact on it, and able to form their identities in a safe place supported by trusted adults.

I’ll be asking for your vote to join the hard work of our current Assembly Members, Sian Berry and Caroline Russell in fighting to protect our capital’s youth services in the campaign to end youth violence in London. With no members of the GLA currently under 30, things have to change. My experience makes me the perfect candidate to be a vibrant, positive force to fight for young people in our capital. 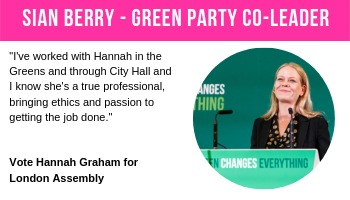 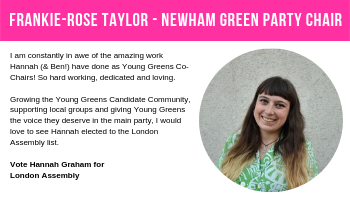 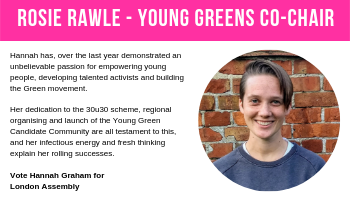 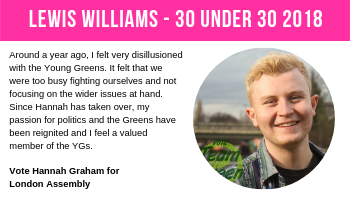 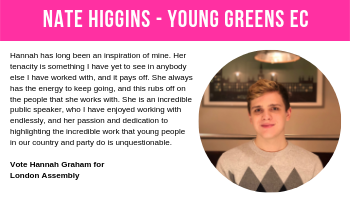 [Promoted and produced by Hannah Graham as part of their campaign for election to the post of London Assembly. This is not an official communication from the Green Party of England and Wales.]